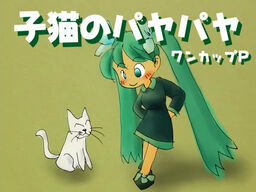 Although Onecup-P's published many VOCALOID works in late 2007 during Miku's booming popularity, Koneko no Paya Paya was his first work to gain significant recognition and was one of Hatsune Miku's earliest hits on Niconico. The song redone with higher quality music and vocals was later featured in the game Project mirai 2.

Miku and MEIKO's module for the song, designed by Onecup-P, featured in Project mirai 2.

Retrieved from "https://vocaloid.fandom.com/wiki/子猫のパヤパヤ_(Koneko_no_Paya_Paya)?oldid=1145355"
Community content is available under CC-BY-SA unless otherwise noted.