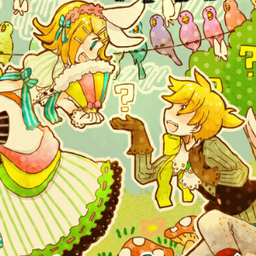 The song was first uploaded on November 14, 2011. It was Yuugou-P's first collaboration with 7:24 doing the illustration. Along with "Strawberry" sung by Rin and "Pink Rose" sung by Len, it became one of his few most notable Kagamine works. Later, the original illustrator 7:24 made a fanmade PV of the song; however, she listed it as a fanmade PV which has no relation to the original story of the song intended by Yuugou-P whatsoever.

It tells a story of a boy (Len) who was worried of the Princess' (Rin) happiness. She seemed somewhat down and the Princess decided to send him on a quest to find a particular jewel. It was a riddle, that she gave him, something that only one will be able to solve.

By the end of the song, the boy finally solved the riddle and the Princess was pleased. A bond was thus formed between them, which blossomed into love.