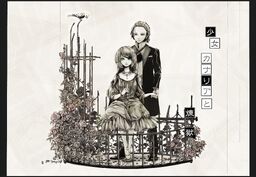 "The Purgatory and the Canary Girl" is track one from Chapter 2 of Hayakawa-P's Girl Series (少女シリーズ / Shoujo Series). In this story Len's role is a rich nobleman who fell in love with a singer at the bar (Rin). He thought money was everything and thought he could buy her and her love. In the end he commits suicide, along with murdering Rin by setting her and his mansion on fire.

This song isn't the most popular in the series; however, a human cover derivative by Fukuwa had over 300,000 views, which is 10 times more than the original by Len (which currently only has 27,000 views. This song was a part of Hayakawa-P's album "Flying Classroom" and so Canary Girl is purchasable from Amazon and iTunes store as a singles / full album (the album Flying Classroom is licensed by KarenT)

Hayakawa-P commented on his blog, not only the introduction to the series, but how he was also aiming to produce a classical song; thus explaining the sounds of the accordion and the piano.

Retrieved from "https://vocaloid.fandom.com/wiki/少女カナリアと煉獄_(Shoujo_Canary_to_Rengoku)?oldid=1195124"
Community content is available under CC-BY-SA unless otherwise noted.