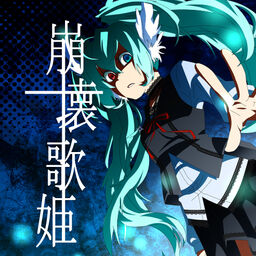 “Even though this is such a beautiful world, I wonder what destruction I could possibly cause.”
—Author's comment (translated)

This song is the sequel to one of Machigerita's earlier works, Test Tube Princess

It is about an artificially created being called "The Final Weapon -Version 2-" that was made after the first Final Weapon, "The last Eve" had an existential crisis and fled. Though Version 2 is supposed to be superior to Eve, she too begins to question the meaning of her existence and if there really is reason for her to cause destruction.

Retrieved from "https://vocaloid.fandom.com/wiki/崩壊歌姫_-disruptive_diva-_(Houkai_Utahime_-disruptive_diva-)?oldid=1108099"
Community content is available under CC-BY-SA unless otherwise noted.