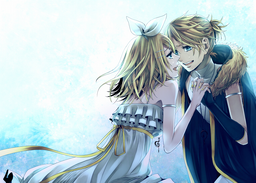 “Peace and blessings to the spinning world
Unleash the light, fate, and darkness”
—Author's comment

"Meguru Sekai no Requiem" was first uploaded on December 19, 2012, as the third and final song of the Synchronicity series. At the same day, the album EndlessroLL was also released, with "Meguru Sekai no Requiem" as one of its tracks. The song ends the three-year cliffhanger of the series, with Rin and Len finally reunited. Their wishes are completely opposite of each other's; they face their fate, singing to the dragon so it can "sleep for an eternity" even if it means giving their lives away. However, instead of both of them dying, they live and are successful in sealing the dragon away forever. Whatever happens to them next is up to the interpreter.

Note: Rin and Len are singing more or less different lyrics at the same time here. Just because one of their lines are before the other doesn't mean that they sing first or last.

Suzunosuke has released several works in relation to Synchronicity, including Colorful 2 (with one of its stories uploaded to Suzunosuke's Pixiv account one day after the song "Meguru Sekai no Requiem" was uploaded to Niconico) and the full color book Synchronicity ~Kioku no naka no komori uta~, released on December 31, 2012, at Comiket 83.