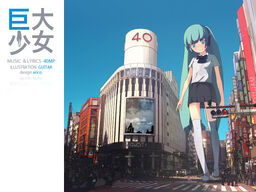 "Kyodai Shoujo" is an original song by 40mP featuring Hatsune Miku. It has entered the Hall of Fame.

Retrieved from "https://vocaloid.fandom.com/wiki/巨大少女_(Kyodai_Shoujo)?oldid=1102525"
Community content is available under CC-BY-SA unless otherwise noted.