This is the fifth song in Utata-P's Happiness Series and also his first published work to feature Yukari.

The song is about a girl playing a video game and trying to enter the secret command for 'happiness'. The further she plays though, the more unreasonably complex the required button combinations become. In the end she is unable keep up with the game. The video ends with a phrase "It's just too much".

This song has entered the Hall of Legend and is the first Yukari song to do so.

This song was featured in the album Minna Shiawase ni Na~re!. 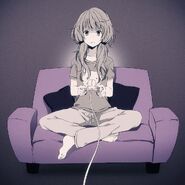