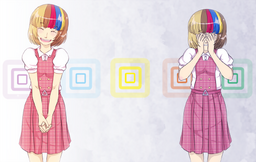 The song was uploaded to Niconico on August 8, 2012 and has gained over 300 views, yet it was exceeded by its YouTube counterpart (uploaded by EmpathP), which has gained over 12,000 views.

The song is based on, like the title suggests, saying goodbye to a childhood friend. EmpathP says she wrote the song after finding an old notebook she had in kindergarten, in which there were drawings of her old imaginary friend. She realised how much fun she had had with him, and wondered why she ever stopped believing in him. Thus, she wrote the song.

In EmpathP's album Fables of Farewell, "Goodbye to a Childhood Friend" and an instrumental of the song is included. This song is featured in Vocallective's compilation album, Vocallective Sampler 2.