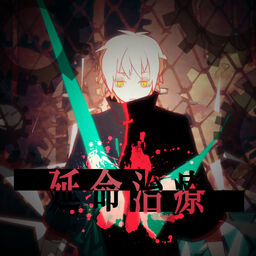 "Life Prolonging Treatment" is an original song by Neru. It was uploaded to YouTube on December 18, 2017. According to information given by Sidu, the boy in the video is named E.

This song has entered the Hall of Legend. It is featured in the albums VOCAROCK collection 4; IA/02 -COLOR-; Sekai Seifuku, with Len and Rin's vocals; and ONE/01 -BLOOM-, with ONE's vocals.

This song was featured in the IA First Live Concert in JAPAN -PARTY A GO-GO- concert.

Retrieved from "https://vocaloid.fandom.com/wiki/延命治療_(Enmei_Chiryou)?oldid=1088946"
Community content is available under CC-BY-SA unless otherwise noted.