"Lover's Suicide Oblivion" is an original song by OPA. It is his most notable song, and one of MEIKO's early hits (at that time in 2007, most notable songs were sung by Hatsune Miku; MEIKO and KAITO didn't have many hits).

The original video was taken down not too long after it reached 40,000 views. When asked about the situation, OPA stated he wasn't "satisfied" with the lyrics of the song. Later on, he read and fell in love with Asaki No'9's poem entitled Boukyaku Shinjuu.

The video was reuploaded on November 22, 2007, with several tweaks, and entered the Hall of Fame on October 2, 2008. Additionally, OPA released an "arranged" version of "Boukyaku Shinjuu" as a single through KarenT. Both the arrange cover and the original version were featured in an album named after the song (Boukyaku Shinjuu).

The song talks about Meiko losing her partner and asking herself constant questions about death, in the end she commits suicide and feels bad because her worst nightmare came true: Being forgotten. However, she waits for the moment when she can reunite with her partner again. 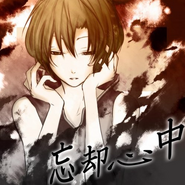