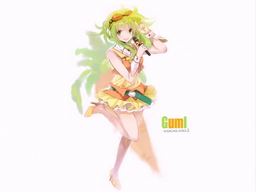 Noboru↑-P's first song to enter the Hall of Fame and winner of INTERNET Co.'s "Have Megpoid Sing Festival",[1] a song about a girl getting the attention of the boy she likes. It was published on GUMI's release date, June 26. It was originally going to be a death metal song (hence the です☆めた in the video title) but somehow turned into an idol pop song. Noboru↑-P has also said that he likes the way "LOVELOVE" in the lyrics sounds more like "nyan nyan".

This song is included on the albums Koi wa Kitto Kyuujoushou☆, 12STARS, Ecstasy, GUMism from Megpoid, and Memories of GUMI 2009-2013 feat. Megpoid.

Retrieved from "https://vocaloid.fandom.com/wiki/恋はきっと急上昇☆_(Koi_wa_Kitto_Kyuujoushou☆)?oldid=1089430"
Community content is available under CC-BY-SA unless otherwise noted.