"Koisuru VOC@LOID" is an early Miku work by OSTER project. In the song, Miku sings a small love song to her owner. "Koisuru VOC@LOID", "Miku Miku ni Shite Ageru" and "Packaged" are the three pillars that set the model of Vocaloid personification, and these songs inspired many succeeding composers.

The original song exists in two versions, both uploaded on the same day. The second version, the "modified version", is by far and away the best known of the two, having entered the Hall of Legend on October 15, 2008. 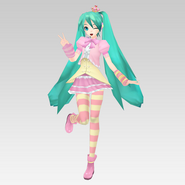