“Willingness to atone for one's sins by life in prison.”
—Author's comment

"Love Trial" is an original song by 40mP.

This song has entered the Hall of Legend and exceeded over 10 million YouTube views. It also achieved 1st place on Nico Nico's June 2014 Monthly Vocaloid Ranking. Hence, this is 40mP's most notable song, and one of Miku's most notable songs.

Oh! No! No! No!
I don't know what came over me
You know you're everything to me
C'mon, cut me some extenuating circumstances
I can't keep living alone

Oh! Jesus!
Don't look at me like that
Please, I'll do anything, I'll have a change of heart
Just suspend my sentence
Let it go this once

My alibi for this pre-meditated crime
Won't fool you
Cheap tricks are a no! no! no!

My love's on trial
Just how many crimes are you going to accuse me of?
Closing statement, after the tears
You pronounced me guilty

Oh! No! No! No!
This is a worst-case scenario
If you're going to dump me
At least use your own hands
When you toss me into the darkness

Oh! Jesus!
Evidence speaks louder than words
I won't make excuses
Look, you can lock me in your prison
For as long as you like

What's so perfect about my crime?
You and I bear the same sadness
The one who loved, the one who was loved
We're fated to put each other on trial

So the verdict is "guilty"
Just how many crimes are you going to accuse me of?
I'm ready to do life to pay for my crimes
Protecting you till the day I die 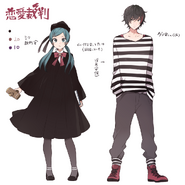 Tama's concept art for the song.

Story-board of the song, by Tama.