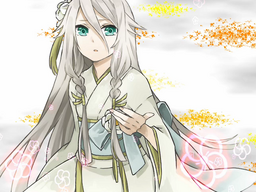 “Let the flowers bloom in the death of love.”
—Author's comment.

PolyphonicBranch's first published work to be sung by IA.

This song is featured in the PS Vita game, IA/VT Colorful.

Retrieved from "https://vocaloid.fandom.com/wiki/%E6%81%8B%E6%A4%BF%E5%A7%AB_(Koi_Tsubaki_Hime)?oldid=1028780"
Community content is available under CC-BY-SA unless otherwise noted.