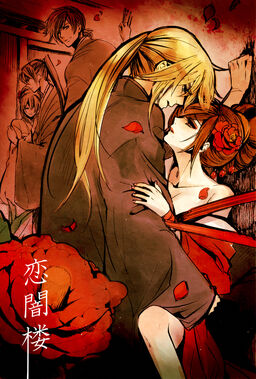 "Koi Yami Rou" is the sequel to Ama Yume Rou, telling the story from the man's point of view. It was released on STORIA.

Born as the third son of a wealthy merchant, he had spent most his days in his home with his brothers: the kind, older one (Gackpo) and the middle brother, who was a painter (KAITO). One day, his oldest brother brought home a friend of his (Luka) and the third son fell in love with her. After his brother grew up to marry her, he decides to set out and find his own love.

Stumbling across two brothels he enters a relationship with the two most popular women of each and soon realizes his genuine love for one of them (Rin). Although he promises both women he'll return, he assures himself he'll come back for the one he truly loved, either because of the other one's (Miku) untimely death or just because he only cared for one of them.