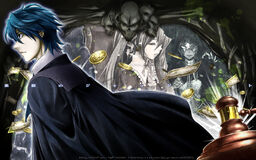 “Money bends even the laws of hell”
—Author's comment

Gallerian Marlon (KAITO) is the Supreme Court Director of the USE Dark Star Bureau. He claims that he desires money more than justice and is willing to declare anyone innocent as long as they have money. He has recently been widowed and is seeking to cure his and his wife's "daughter", Michelle (Miku) of her handicap. Ma (Luka) told him that if he gathers the Vessels of Sin, his wish will be granted, so he continues his corrupt ways in order to grant and gain what he wants.

Later, he declares war criminal Tony Ausdin (Tonio) innocent despite his crimes that makes him deserving of the death penalty. Civil war then breaks out and during it, in wrath, someone sets his house on fire and he stays by his daughter's side as the flames consume them. He later awakens in the Hellish Yard and is greeted by the "Master of the Hellish Yard" (GUMI) and she tells him he can be let into the Heavenly Yard if he gives up his fortune. He snaps that he'll never give up his fortune and then, the Master sends him to the lower planes of the Hellish Yard.

This song has also entered the Hall of Legend.

This song is featured in the following compulation albums: