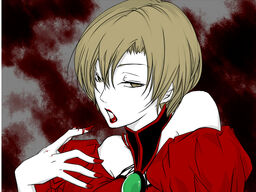 “Bow down and worship our great Conchita”
—Arte and Pollo, Banica's servants

The song concerns Banica Conchita (MEIKO), a woman who, at one time, ate only the most delicious and exquisite food. Now, however, her tastes have evolved so that she wants something new and grotesque every day, and nothing enters or leaves her palace. One day, the fifteenth personal chef of the year Joseph (KAITO) asks for a brief vacation (in an attempt to flee). She refuses, and eventually eats him after he poisoned himself. Soon after, she ends up eating her butler Pollo (Len) and maid Arte (Rin), and when everything has gone, she ends up eating herself. Its initial phrase is 「さあ、残さず食べなさい｣ ("Now, eat up without leaving anything").

This song is one of the tracks of Akuno-P's Seven Deadly Sins Series.

This song is featured in following albums:

This song is featured in following compilation albums:

Retrieved from "https://vocaloid.fandom.com/wiki/悪食娘コンチータ_(Akujiki_Musume_Conchita)?oldid=1102459"
Community content is available under CC-BY-SA unless otherwise noted.