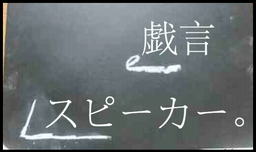 “Sometimes, when you put words to your thoughts, you start to not understand them.”
—Author's comment

"Tawagoto Speaker" is a song featuring Hatsune Miku by nekobolo. It has also received both English and Chinese versions sung by Miku and YANHE. The original Japanese version has received over 1 million views on Niconico, entering the Hall of Legend.

I try to ignore the hurt inside
And bit, by bit
Part of me dies
The smile on my face is just a lie
A lie, a lie
I just can't hide

The blade of a knife that cuts so deep
The pain, the pain
I don't dare speak
I can't let you know the way I feel
A secret I will keep

I toss and I turn, I just can't sleep
You're gone, so long, that's fine with me
I won't turn around, my mind is clear
but the wounds that you leave never heal

Now I know you'll never change
You've got the same look on your face
And things will never be the same
It's over now and you're to blame
Twist the knife, I feel the pain
You hurt me but I won't complain
And like a fool I'm smiling through the tears
A fool, for you

I don't need your sympathy
Your vicious lies they're killing me
And things will never be the same
It's over now and I'm to blame
Can you do one last thing for me?
Put me out of my misery
I hide behind the lie that has become the new me, the real me

Below is an official Chinese translation: via Producer. Amendments may have been made to the original translation.

Retrieved from "https://vocaloid.fandom.com/wiki/戯言スピーカー_(Tawagoto_Speaker)?oldid=1148431"
Community content is available under CC-BY-SA unless otherwise noted.