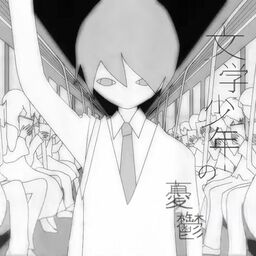 A song seemingly about a young boy, presumably a writer, or at least aspiring to be one, contemplating his own life. Osare-P's animated, monochromatic music video symbolically shows the boy on a train going by his day-to-day life, when the train suddenly leaves the tracks and flies into the sky. The boy drops his book encasing a prominent red bookmark, whereupon reaching to pick it up, the book, as well as the other books seen lying around, transform into doves. The boy chases the dove carrying the bookmark in its mouth to the back of the train car, and the bird flies away as the boy stares out into the sky. At the end of the video, the boy, now visibly an old man, is sitting on a bench at the train station, and he tries to shoo away the doves on the ground around him by stomping his cane on the ground. Interpretations of the song and video vary by person to person, as no official explanations have been provided.