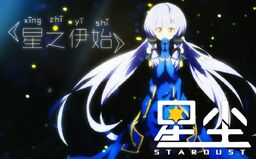 "The Beginning of the Star" is an original song by Tianqin and IcedSoymilk featuring Xingchen. It is her third demo song. The song is about Xingchen starting her new life on earth. Though she was nervous at first, she believes that she would no longer be lonely compared to when she was living in space.

This song was featured in the Quadimension Live Tour concert.

Retrieved from "https://vocaloid.fandom.com/wiki/星之伊始_(Xīng_zhī_Yīshǐ)?oldid=1096855"
Community content is available under CC-BY-SA unless otherwise noted.