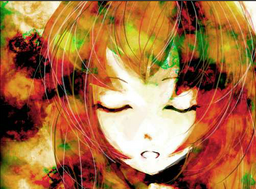 This song was uploaded to Niconico on January 30, 2009. It is otetsu's most famous song, with over 1 million views on Niconico Video; uploaded in January 30, 2009, the day Luka was released. The lyrics are hard to understand, One theory is that it is a sad love story involving two close friends in a deteriorating relationship during their high school years as a new person (Megurine Luka) enters their lives (Based on the 2015 novel). Another is that Luka is sketching and painting stars and fantasies in the black canvas and the night sky where she is living in her own world (Utopia). These fantasies become real for her too as she now can't flee from anything or let anything get away from her in reality.

Piano sheet music appeared in the Piano Solo Yasashiku Hikeru 2 collection. Additionally, a novel based on the song is planned for release in the near future.

A book based on this song was also produced.[1]