"Hoshi Meguri no Waltz" is a original song composed by GYARI and one of most notable songs. According to the author this song is one of the different works.

This song was released as a single and featured on GYARI's album Aurorayer and the compilation the VOCAJAZZ vol.1.

A manga adaptation illustrated by GYARI was released on his pixiv account in July 2012. This manga was inclused in a special edition of the single.[1] 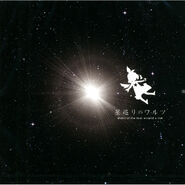