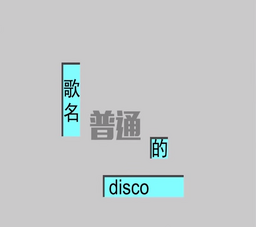 “This is an ordinary song.

Just as expected, this ordinary disco is my style.

"Pǔtōng DISCO" is an original Luo Tianyi and YANHE duet song that was produced by ilem. This song became overwhelmingly popular within its first week of existence. It is about how an ordinary person listens to an ordinary tune on an ordinary day at an ordinary street, and they feel an ordinary hype as they do an ordinary dance.

The PV has images of and references Tuzki the Rabbit, an iconic character within the Chinese messaging community.

To celebrate the new year of 2016, famous singer Chris Lee sang her own version of the song live on stage. ilem noted that the performance was meant to be a surprise for the audience.

On December 8, 2016, the song was performed by Luo Tianyi, YANHE, Yuezheng Ling, and Yuezheng Longya. This was the second public song demonstrating Longya's voicebank.

Retrieved from "https://vocaloid.fandom.com/wiki/普通DISCO_(Pǔtōng_DISCO)?oldid=1094105"
Community content is available under CC-BY-SA unless otherwise noted.