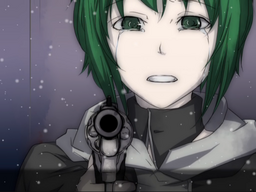 The story follows the love life of Nemesis Sudou (GUMI). When her lover, Nyoze Octo (Gackpo), becomes a target of her organization she's forced to kill him. As she approaches him, she recalls all the good times they had, their first meeting in the spring, the memories they made in summer and making love for the first time in fall. After exchanging their last words, Nemesis shoots Nyoze. She falls to the ground and cries in grief, but promises him she'll come see him soon and shoots herself.

This song was featured on the albums 100%GUMI宣言! and GUMism, as well as Akuno-P's own EVILS FOREST. Later two rearranged versions were made for the Nemesis no Juukou album and Seven Crimes and Punishments album.

Retrieved from "https://vocaloid.fandom.com/wiki/最後のリボルバー_(Saigo_no_Revolver)?oldid=1200804"
Community content is available under CC-BY-SA unless otherwise noted.