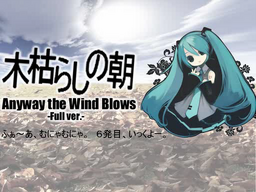 This song is Deadball-P's 18th original work. It has entered the Hall of Fame and is featured on the albums Dead Ball Project vol.1 and EXIT TUNES PRESENTS THE VERY BEST OF Deadball-P loves Hatsune Miku.

This song was featured in the Miku FES'09 concert.

Retrieved from "https://vocaloid.fandom.com/wiki/木枯らしの朝_(Kogarashi_no_Asa)?oldid=1077829"
Community content is available under CC-BY-SA unless otherwise noted.