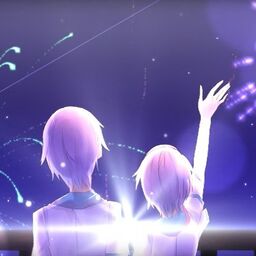 In this song, YANHE takes on the role of a sick girl who is secretly in love with a boy. She sings about watching fireworks with one of her good friends. Repeatedly throughout the song, she feels confused as to why she feels so odd when around him even though what they feel for each other is just friendship.

At the end of the song, when she noticed the light of the fireworks reflected in his eyes, she seems to admit to herself that she really does like him as more than a friend.

It should also be noted that in the PV, the boy takes on the appearance of a gender-bent YANHE, even wearing a uniform with the same colour theme as her.

The producer also explained that because YANHE has a deep voice, it was decided that she should take on the role of a sickly character in this song.

This song was featured in the The Stage 1 album.