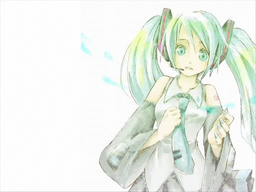 “Thank you really for those who listened to it, sang it, etc…”
—Author's comment

"Though My Song Has No Shape" is an original song by doriko and is one of his most notable songs. It is a ballad about how songs do not fade with time. It is included on the album unformed.

As I wake in a world of pure white
My outstretched arms find nothing to hold
No matter how close the sky above
What have I lost?

And sing
You made me smile, and when you cry
Even though I'm weak
I want to protect you

This light will beat its wings
And cross the sky
To reach you, so far away
That's the song I want you to hear