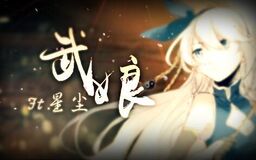 "The Girl Warriors" (also known as "The Girls of Kung Fu") is an original song featuring Xingchen and according to H.K. Kun, it is about the adventures of a pair of Kung Fu girls who lived during the ancient times.

The Warrior’s World is a one way road, that leads to the finale
sung by the legendary Girl Warriors

One young man enters the Divine Land with his sword on his back
journeys magnificent scenery
Finding that Kung Fu is honored by girls as a nation wide tradition
under the ancient history, now comes the new storm

Peony in flowers
To where the Moon fall, for whom the Wine drink
there is no turning back in the world of mortals
writing brushes present grace character zither harmony composes knight spirit
Girl Warriors standing under the sunset glow

Dust on earth
The Warrior’s World is never changed, flash and blood buried under the Lotus Fields
the circle of life is nothing but illusion
the natural moat cuts off the path, shadow of wild geese reflect on the mountainside
The cliff stairs winds round the Peak of Jade that thrusts itself towards the sky
All that under the setting sun

by casting a spell, day suddenly turns into night as the black snow begins to fall
The ice blade separates the eastern water flow, The thunder wave pour on the West Lake
by opening the phoenix eyes, a golden laser smashes the black hole of nothingness
now we are on the one way road that leads to the finale of warriors