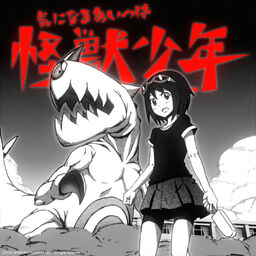 The song tells a story about a girl who had a crush on a new boy, and on the first day of summer break she followed him home. He went into a field where she discovered he had a pet monster. After promising not to tell anyone, they started having a relationship together. On the last day of summer break, the monster eats the boy. The boy tells the girl not to worry and that he was still him. They go to school together, and everybody is screaming and freaking out. As the "sports meet" began, the two of them run in an "obstacle course", and people are firing at the target, the Monster Boy. The ending is unclear as to whether the boy was shot down or not.

Retrieved from "https://vocaloid.fandom.com/wiki/気になるあいつは怪獣少年_(Ki_ni_Naru_Aitsu_wa_Kaijuu_Shounen)?oldid=1130076"
Community content is available under CC-BY-SA unless otherwise noted.