“It's surely that kind of a world.”

"Meltdown" is an original song by iroha(sasaki) and is widely regarded as his best work. It's also one of Rin's most notable songs.

There are various interpretations of this song. The PV can be literally interpreted as Rin jumping into a nuclear reactor to commit suicide, or it can be interpreted figuratively as Rin trying to get rid of her past or purge herself of her sins in order to grow up and become an adult.

Iroha has said the lyrics and video represent conflicts in the singer's inner psychological world. In the video, Rin jumps into a reactor core/nuclear reactor and chokes someone, possibly to death. The little Rin stands for innocent childish mind inside her. The choking scene symbolizes erasing her past self and starting anew.[1]

There was a controversy over the video and the Weekly Vocaloid Ranking on Nico Nico. Taking advantage of the Vocaloid Ranking's score system, people made dummy accounts and put the song on their My List just to increase the song's score in the ranking, making it stay in the top 20 indefinitely. Though iroha(sasaki) asked his viewers to stop this illegitimate practice, they did not stop and in retaliation, Iroha deleted the video from his account and put it up on Nagimiso.SYS's. This disqualified the video from being in the rankings, as one of the requirements is that the original composer must submit it.

This raised awareness about the cheating behind the rankings. The score system was modified, thus taking many long-lasting regulars such as "Hatsune Miku no Shoushitsu", "Miku Miku ni Shite Ageru", and "World is Mine" off the list altogether.

The city lights are spectacular,
but I feel ether's lingering chill
I can't sleep, It's 2 AM,
And everything's changing so fast

In my dream I strangled you
In the languid afternoon light
I watched your throat, thin and twitching
Through eyes brimming with tears

The second hand on a clock, a TV host
Someone there I just can't see
Their laughter echoes as it swells

I dreamed the whole world vanished
In the night, my room feels vast
And the silence chokes my heart
Making it hard to breathe

If I jumped into the core
I'd vanish, like I had gone to sleep
A morning without me would be perfect
All the gears everywhere meshing together

That's how the world would be

Rin's Reactor Module, for the song Meltdown. From the videogame: Project DIVA:Arcade

Alternative version of the monster "Condemned Fantasy - Kagamine Rin", showcased for promotion and in-game use 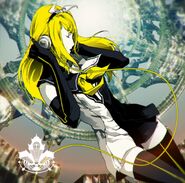 The cover of the Meltdown single album.