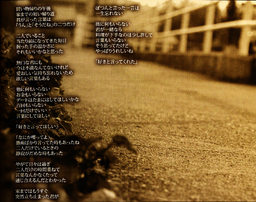 “This is a bit diffrent than usual
Occationaly I make songs like these, heh
For now it'll be Piapro limited”
—Author's comment

A girl on a date with a boy who doesn't talk too much and she wishes he would tell her he love her. Eventually as he takes her home, he confesses his feelings which makes her happy.

Akuno-P jokingly tagged the song as "Zen no P(Producer of Good/Good Producer)", a spin on his producer nickname "Aku no P (Producer of Evil/Evil Producer).

This song is featured on Akuno-P's EVILS FOREST.