For the song by Masa, see 狐の嫁入り (Kitsune no Yomeiri). 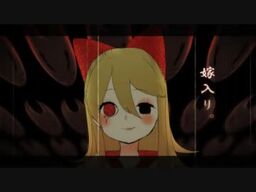 Kitsune no Yomeiri tells a story about a fox demon (Rin) falling in love with a human. She used her magic to be with him, transforming into a human female and set out to find him. However one day while she awaits him she notices he's together with another woman. Overcome with grief of his rejection, she murders the other girl believing it's the only way they can truly be together.

The title refers to the sunshower phenomenon in Japanese folklore; they believed that sunshowers occur every time two fox demons (or a fox demon) get married, which is believed as a good omen. In Japanese folklore fox demons were mischievous tricksters and seducers/seductresses that trick humans by using their magic, and the Sanzu River is equivalent of the river Styx.

This sing was first released on 10story's before recieving it's own PV, it was later featured on OSTER projects's own Attractive Museum.

In style with the 10story's album, a narrated version written by OSTER project and read by Miyuki Sawashiro was released alongside the song. It is also told from the point of view from the Kitsune, where she swears that if she can't marry her love in the mortal world, she will marry him in hell.

A two volume Manga adaptation was created by Yuuko Satou and published by Comic Walker was released in 2014.

This adaptation tells the story of the siblings Len and Rin Kitagami. Rin is Len's older sister and is constantly trying to seduce him, much to his distress. Len is the heir of the country Musashi but ever since their father's death, they've been an easy target for neighboring countries. As their sixteen's birthday approaches, their uncle suggests that Len marries the Daughter of Lord Kaidou (KAITO) of an enemy country, Owari. Rin then grows angered as she wanted Len for her own, but he is willing to do anything to save the country. When they finally meet the daughter, Miku, they are distraught to find that she resembles Hatsune, their deceased childhood friend.