The lyrics are vague, but a rather popular interpretation is that they have a mysterious terminal illness and only have a few months left to live. They wish for their lives to be prolonged. Without much of anyone to depend on, they must depend on each other for strength and support. In the end, the doctors say that a fever caused them to die, although no one is sure.

According to Neru, the song's themes are codependency and release.[1]

This song is featured in the following album:

This song is featured in the following compilation album: 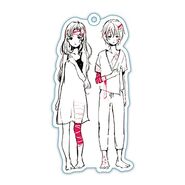 Bonus charm that came with the amazon.jp exclusive version of CYNICISM