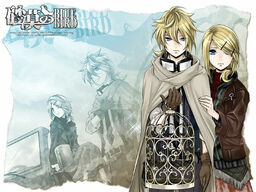 “If I'm with you, I'm sure it can be overcome”
—Author's comment

A brother and a sister are sent out by an old woman to find "Desert Bluebird", a miracle bird that can grant any wish. The siblings travel across the country Lucifenia and find an abandoned city where the Bluebird resides. The brother points out the building, but it's too dangerous to go inside so he hesitates. The sister then gathers courage and sprints past him, into the building and finds the bird but dies due to radioactive poisoning. Grieving his sister's death, the brother uses the wish to ressurect his sister. They then keep walking until they reach a sea, and decide to restart civilization there.

This song was first released on EXIT TUNES' Supernova 3. It was later included in Akuno-P's Judgment of Corruption ~A Court of Greed and Akujiki Musume Conchita (Kai)

This song has entered Hall of Fame

Retrieved from "https://vocaloid.fandom.com/wiki/%E7%A0%82%E6%BC%A0%E3%81%AEBLUEBIRD_(Sabaku_no_BLUEBIRD)?oldid=967292"
Community content is available under CC-BY-SA unless otherwise noted.