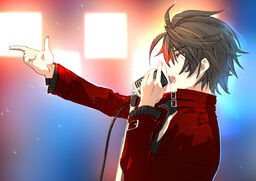 Satoimo's 43rd original song. It is their fifth song featuring Kiyoteru and their first using one of Kiyoteru's V4 voicebanks; the song was uploaded on the same day as Kiyoteru V4's release.

On December 4, 2015, Satoimo uploaded the V2 version of the song for Kiyoteru's 6th anniversary.