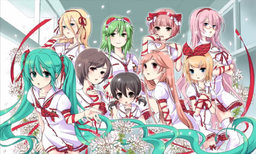 "Secret Afterschool" is an original song by SCL Project. It's also natsuP's first work with Lily, Iroha, Yuki, and Miki. She originally uploaded it to Niconico under the username "???" due to the song's lewd nature. She has since revealed herself as the producer, and it has since become one of her more notable works. The song features rap segments in Vietnamese using Gackpo suspected to be sampled from from the Vietnamese song "Mắt nai cha cha cha".

This is a more risque Vocaloid song with an idol atmosphere and a dating sim theme. The 9 girls fight for the attention of a boy (Gackpo) and gradually have more and more intimate encounters in secret, after-school, as the song progresses. It is debatable how sexual they are.

This song has entered the Hall of Fame. It is featured along side the sequel in the E.P. album 秘密の課外授業!.