Vocaloid Wiki
Register
Don't have an account?
Sign In
Advertisement
in: Hall of Legend, Songs with 10K piapro views, Song Work in Progress,
and 8 more

"Secret Police" is an original song by Buriru-P and is his most notable song. It seems to be a fun, rock tune making fun of corporations like the NSA or other agencies due to their history of spying, though the song could just be nothing more than a fun rock style song.

A novel was released on November 17, entitled Secret Police File:01 -Escape-. A trailer for the novel can be seen here.

An appearance by Miku (with band MKP39) at the "JOIN ALIVE" music festival. She performed "Tell Your World", "Himitsu Keisatsu", Nijigen Dream Fever, Arifureta Sekai Seifuku, glow, "Hatsune Miku no Gekishou", World is Mine, and ODDS&ENDS. 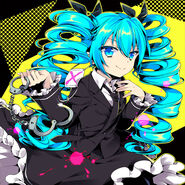 The cover of Himitsu Keisatsu's Novel, illustrated by Manbou no Ane.