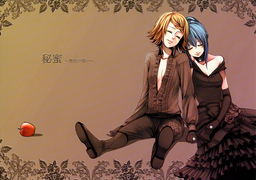 This song is the sequel to Himitsu ~Oath of Black~. It was featured on the Himitsu ~Colorless Oath~ album and later on the STORIA album.

This song tells the story from Miku's point of view. She knows that she had pushed away the person she loved the most, yet she couldn't remember who that was. On the day of her wedding, she meets a man named Len and runs away with him. Although she loves Len, she feels that it isn't right and it hurts her. Later Miku is shot by Kaito and when Rin trades her wing for Miku's life, she recalls who Rin was, but it's too late as without her wings she dies. Even though Miku was heartbroken by her lover's death, she believes that if she keeps loving Rin, they would see each other again.