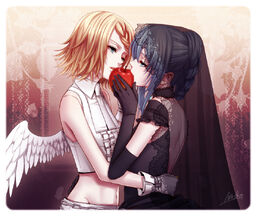 “The meeting at night, would eventually lead to an unforgivable sin.
A pathetic fallen angel, a human girl, the forbidden fruit, love and allurement, and a deadly betrayal, all in this one tragic love story.”
—Author's comment

The song tells of the angel Rin, that stumbles upon a girl, Miku Crynpto, who Rin instantly falls in love with. But, love between an angel and a human is forbidden, and Rin yearns to find a way for them to be together. She kisses her and disappears in shame. Afterwards Miku meets a mysterious boy named Len, and falls in love with him. Although she is to be wed to another man, she left with Len. However, another angel, Kaito, Rin's old partner, has been sent to punish Miku and kills her. Len reveals himself to be Rin, having given up one wing to a demon to be with her. Rin gave up her last wing to save Miku, sacrificing herself and leaving a single feather.

This song is featured in the EXIT TUNES compilation album "Vocalonexus", in Hitoshizuku-P's mini album Himitsu ~Mushoku no Chikai~ which also includes an answer song explaining the girl's point of view, and STORIA. It is also featured in Yamashizuku's debut album EndlessroLL.