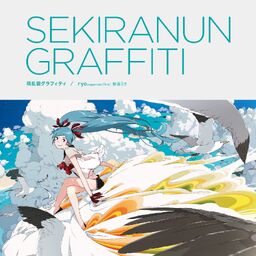 "Cumulonimbus Graffiti" is an original song by ryo and Dixie Flatline. It is accompanied by a well-executed anime music video depicting Miku flying among clouds. It is the opening theme of the video game Hatsune Miku -Project DIVA- extend.

The official upload of the short version of "Sekiranun Graffiti" on SEGA's Nico Nico channel has entered the Hall of Fame. The song was first released as part of the split single Sekiranun Graffiti / Fallin' Fallin' Fallin', along with its instrumental and a remix by baker. It's also featured in the album 初音ミク -Project DIVA- extend Complete Collection.

It is interesting to note that "sekiranun" translates to "cumulonimbus", a type of cloud that can develop into a supercell storm.

A sudden rainstorm passes through
Dripping wet, we stand still
A hint of the smells of summer
Come one, let's go on a journey
Somewhere faraway

However much time passes
We'll hold this feeling close
And live on
Love and music, that's all we need
I have everything I want within me

The sea draws near, maybe we can jump right, just like this

Let's roll down the windows
Ride the wind, go where it leads us
An off-tune hum
An off-the-mark joke, they're not so bad

Though the world may change someday
We can cross the night and come back
And we'll know for sure
You smiled, just fooling around
I gave you my smile back and the days passed by

The hands on the clock keep spinning, what will you believe in from now on?
I'll tell you

However much time passes
I'll hold this feeling close
And we'll live on
Love and music, that's all we need
You have everything that matters right from the start
Within you

Still from the song PV

Retrieved from "https://vocaloid.fandom.com/wiki/積乱雲グラフィティ_(Sekiranun_Graffiti)?oldid=1102976"
Community content is available under CC-BY-SA unless otherwise noted.