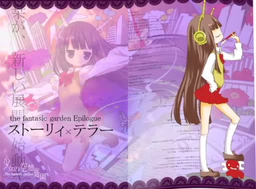 "Kuusou Teien Izonshou" is an original Kagamine Rin song composed by cosMo. It is the sixth song in The Fantastic Garden series. This song has entered the Hall of Fame.

Brainwashed by the self-satisfaction from creating the Fantastic Garden, the girl struggles to keep her control over it, but in the end is completely left powerless. Even though she hates it, she knows she can't leave, because there's nowhere else for her to be except in the Garden.

This song was featured in the album InfiniteHOLiC.

Retrieved from "https://vocaloid.fandom.com/wiki/空想庭園依存症_(Kuusou_Teien_Izonshou)?oldid=1104062"
Community content is available under CC-BY-SA unless otherwise noted.