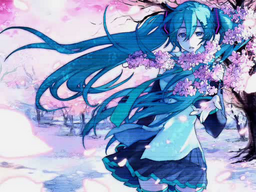 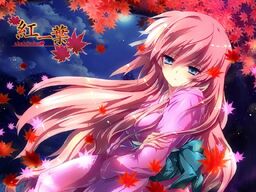 Luka's costume was featured in the online game TinierMe, and also featured in a few albums such as EXIT TUNES PRESENTS Vocalodream, Vocaloseasons ～Autumn～, and Fabulous∞Melody. KarenT licenced Akahitoha's singles and is available for purchase in iTunes store.

The song tells of a woman who "never misses the water until it's gone". She realized her happiness and love for a man only after he left for war. In the end, she watched the man out to war and promised to love him for eternity.

Swaying in the wind, fluttering down
Over your shoulder I see a single red leaf
Just come close and we'll understand each other
Our sadness will disappear into the sky

The moonlight shone down. In the distance, the sound of a flute and festival drums
This commonplace happiness was such a wonderful thing

Saying in the wind, fluttering down
Over your shoulder I see a single red leaf
Just come close and we'll understand each other
Our sadness will disappear into the sky

Gently, it draws near. The season shrouded in mist, the beckoning firelight
Venturing out lost and stumbling isn't such a bad way to proceed

May my drifting wishes reach you
Cut-off prayers piling up

There are some memories I can't forget
Over your shoulder, a red sakura leaf
Strong, yet fleeting, they bury the world. I'll offer up this love for eternity

Swaying in the wind, fluttering down
Tonight the dark of night is colored red
I just want to be close and be held in your arms
Until our sadness disappears into the sky 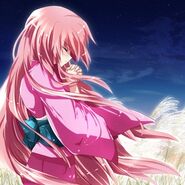