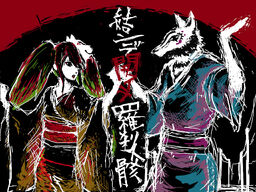 “Greetings, this is Hachi… This time the theme is "malaise" and "carelessness"”
—Author's comment

"Close and Open, Demons and The Dead" is an original song by Hachi and is one of his most notable songs. It was uploaded to Niconico on July 6, 2009.

A dark, mysterious, traditional-Japanese-type composition describing a grotesque and surreal world of monsters and phenomenons, interrupted midway by a refrain of "none of your business". In the original broadcast, Hachi stated that "he meant to depict the cruelty of innocent children". Later on in Hachi's blog he wrote on about how innocent children's "innocence" can actually turn destructive and evil, and also criticizing the general cold and indifferent attitude of the public. He added at the end, however, that he was "limited" in what he could say.

One idea holds that, according to a few minute details in the lyrics, it is about child prostitutes and the cruel deeds that they commit in revenge. Fans on the web elaborated this and seem to be more inclined to believe that the song is actually about the tragic life of the Japanese prostitutes ("cats" in slang). The prostitutes "join up" with and "open up" for their patrons, abort the babies that they accidentally conceive (skulls in their belly), and get right back into business the next day (before the rooster could crow). It is also said that the title of the song, the Rakshasa and the Corpse, hints at the cruel relationship between the patron (a man-eating demon) and the prostitute (a corpse). The exact meaning of the lyrics is open to interpretation.

A cat who lost his leg grins
"Let's play, little miss."
The red cord tied to its collar
Is no replacement for a leg

Ya ya ya ya no no no

Rows of wooden grave markers sing
"Let's dance, little miss."
The flowers that bloomed with such stealth at my feet
Grimace and grumble

One, two, three—Open your hands
Five, six, seven—Put them in the air
Dangling by the collar from a pine tree
All together all together, close them again

Yai Yai—Let's have a child
Yai Yai—Wander and grumble
Rai Rai—Follow along, succumb to the charms
Rai Rai—Demons and the Dead

Miku performing the song in MikuPa 2012.

Hatsune Miku's module 'Rasetsutomukuro' by Hachi from the song Musunde Hiraite Rasetsu to Mukuro for the videogame -Project DIVA- extend.

Hatsune Miku's module 'Rasetsutomukuro' by Hachi from the song Musunde Hiraite Rasetsu to Mukuro for the videogame -Project DIVA- Arcade.