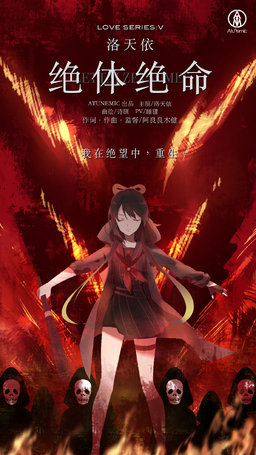 Many people claim that,
"She" is on the way out, and "she" is dead.

Many people highly doubt "her",
and as many people already lost confidence in "her".

"She" is gradually eroded by the darkness.

【All characters in this work are adults, hereby declare】”
—Description

“Who ever thought that language has the ability to stir up a catastrophe?”
—Author's comment

"The Death End" is an original song by Atunemic featuring Luo Tianyi V4's Ning voicebank as the main vocals with Yuezheng Longya's Chun voicebank and Atunemic singing the harmonies. According to Atunemic, the song themes around opposing cyber violence as he doesn't agree with Internet quarreling.

"The Death End" was featured in the BILIBILI MACRO LINK - VISUAL RELEASE 2019 concert on July 19, 2019. However, after the concert ended, the song's choreography was accused of plagiarizing the concert dance for doriko's "Cat Food" by various users on the internet. Vsinger refuted this, arguing that this was false information and maliciously smearing the series', especially Luo Tianyi's, image. The motions and dance were created by a Japanese choreographer who claimed they have never seen the subject claimed to be ripping off of.[1] Shanghai HENIAN then released a legal document and stated that Shanghai Xin Wei Law Firm would be handling the matters.[2]

This song was featured in the BILIBILI MACRO LINK 2019 concert.