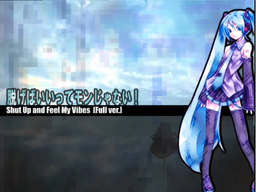 “Originally create this song was to get scolded by Miku, I love Miku very much!!! Err... W hat am I talking about?!!!”
—author's comment

The lyrics are vague, discussing two people and their sex life. The girl becomes sexually frustrated, but remembers why she fell for the boy and decides to continue their relationship.

It has entered the Hall of Legend, is one of Deadball-P's most well known songs.

Retrieved from "https://vocaloid.fandom.com/wiki/脱げばいいってモンじゃない！_(Nugeba_Iitte_Mon_ja_Nai!)?oldid=1104064"
Community content is available under CC-BY-SA unless otherwise noted.