"Law-evading Rock" is an original song by Neru. The boy in the video is named Datsu.

This song shows how people can become brainwashed and lose all their time surfing the Internet, ignoring the real world outside of the Internet and blindly following anything they are told. The video is composed of short, colorful, and poorly drawn clips of memes, anime shows, news broadcasts, and clickbait. They are interspersed with advertisements for a cure-all "Law-Evading Rock," depicted as a rainbow-colored disk. Datsu, who is entranced by the stream of clips, blindly follows the advertisements. Near the end of the song, Datsu is tapped on the shoulder by the male group featured on TV. The leader inserts a "Law-Evading Rock" disk into Datsu's back. The video then dissolves into a chaotic mix of clips from earlier in the video, with Datsu depicted as having seemingly achieved enlightenment and become a many-armed bodhisattva.

This song quickly gained popularity, entering the Hall of Fame with 600,000 views in less than a month on Nico Nico. It entered the Hall of Legend on August 19, 2016. It also exceeded over 10 million YouTube views and received lots of Vocaloid, Utau, and Utaite covers. Hence, this is Neru's most notable song, alongside "Lost One's Weeping", and one of Len's most notable songs.

After the Rain's Cover

Several illustrations that were used in the video. 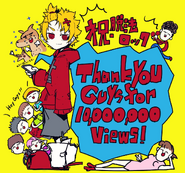 An illustration by Ryuusee in celebration for hitting 10 million YouTube views.