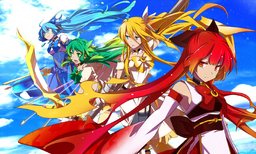 “"And thus it begins, the girls' destiny." From the highly-rated radio broadcast airing every Sunday morning! It's totally not!”
—Author's comment

"Iolite Fantasia~Fantasy of Iolite~" is an original song by SCL Project.

4 nuns become fighters whose main purpose is to defend. Miku becomes a mage, GUMI becomes an archer, Lily becomes a smasher, and Iroha becomes a swordswoman.

This song is featured in the album GOTTANI!.