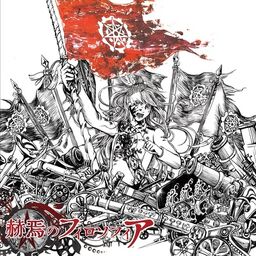 “There is no tomorrow that we can’t change”
—Author's comment

"Philosophia of Radiance" is an original song composed by nyanyannya. This song is the first chronologically released song of nyanyannya's Kadoh-Anna-Ruk-a Saga.

It is also part of the Sing=Laika Magic Saga, a series of song talking about the events that took place in Laika's life (portrayed by Hatsune Miku).

This song is featured in the single of its own name, and in the second disc of the album Kadoh-Anna-Ruk=Cyanotype.