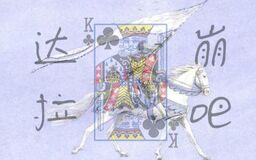 
2. This PV fulfilled my weird intentions.


3. Actually on second thought, the song itself also fulfills that.....”
—ilem (translated by laterallanterns)

"Dálābēngba" is an original song by ilem featuring Luo Tianyi and YANHE. It features the story of a warrior (Dalabengba Bandebeidi Buduobiluweng) defeating a dragon (Kuntukutakatikaote Suwaxilasong) to save a princess.

This song was featured in the bilibili Macro Link VR Vsinger Live concert.

Promotional image for end of year celebration (2018) by TID

Concept art for end of year celebration (2018) by TID

Retrieved from "https://vocaloid.fandom.com/wiki/达拉崩吧_(Dálābēngba)?oldid=1095217"
Community content is available under CC-BY-SA unless otherwise noted.