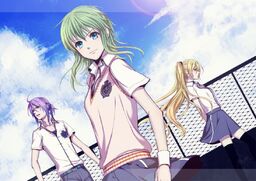 The song was uploaded on Dwango User Entertainment's NicoNico channel, as the third song in their "Who is the Producer" quiz series. On October 11, the producers were revealed to be Hitoshizuku and Yama△, with the song officially appearing on their NN mylists.

This song is featured on the albums V Love 25 -Desire- and After the partY, and has entered the Hall of Fame.